After leaving Petersburg, Michigan we headed north west to connect with route 22 which is a roadway Dani and Trent recommended back at Crystal Rock Campground.  The sights were awesome along the winding roadways and the car was filled with laughter.  Audrey’s map skills were no less than extraordinaire!

She picked routes that were picturesque and focused.  You’ll have to check out her post for some great photos and video.  After traveling a few hours, it was time to find a place to pitch tent for the night and again this was a feat given that it’s the holiday weekend.  After several calls and scans on google nothing showed up.  Again, God showed Himself and we found this amazing place called “Wolf Lake Campground ” also 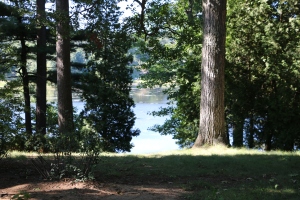 .  We were met by Pam, the owner’s daughter and what a fantastic person.  She was so accommodating and after hearing about our camp ground experiences said she had just the site for us.  Sure enough it was outstanding.  I cannot say enough about this awesome campground. It’s quiet, it’s private, it’s clean and the way it’s laid out you wouldn’t think it was a campground but rather a wilderness setting.  We enjoyed it so much we decided to stay two nights.  After showering we headed into the nearby town for breakfast where we found Granny’s Griddle and some awesome food and service to match.  Then it was back here and to our delight had the chance to meet the owners of the campground, Ron and Joan.  We started talking and didn’t stop for at least 2 hours.

This man has so much character, wisdom and integrity all wrapped with a humbleness rarely seen these days.  These characteristics were complimented by his bride, Joan.  We walked away so refreshed to see embodied in this couple what this great country was founded on.  This place is one on our “come back list” and I hope anyone reading this will check them out.