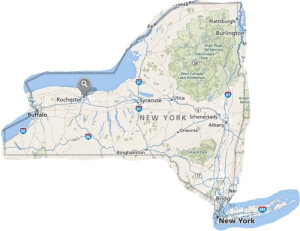 Hello again and welcome back to part 2 and our travels around Rochester, NY.  If you missed “Rochester, NY – Our Back Yard Part 1“ just click here and you’ll be up to speed.  Please remember that if you get lost just click on the “USA Through Our Eyes” heading and you will be brought back to the home page.

Throughout our travels people, would inevitably ask “where are you from” to which we would respond Rochester New York.  What most people heard however is only New York.  Then we would begin the geography lesson about where Rochester was in relation to The Big Apple – New York City.  We certainly can understand where these people were coming from because NYC does get all the attention.

If you “Google” Rochester, NY you will get 41 plus million results.  I certainly don’t want to attempt to duplicate the extensive information contained in those results but will attempt to summarize the best I can without losing to much pretext and post text.

Rochester, NY is a city on the southern shore of Lake Ontario in the western portion of the U.S.A. in the state of New York.  It is seat of Monroe County.  The city’s population is recorded at 210,358 and is the state’s third largest — after New York City and Buffalo.  Rochester was one of America’s first boomtowns, and rose to prominence as the site of many flour mills along the Genesee River, and then as a major hub of manufacturing.  Rochester is the site of many important inventions and innovations in consumer products and the birthplace to such corporations as Kodak, Bausch & Lomb, Gleason and Xerox.

Whew, there you have it, the basic facts about Rochester, NY.  We’ll let you ponder these stats so you’ll have your bearings and be ready for our next post when we begin visiting some great spots throughout Rochester and the surrounding community.  We think we have captured some great waterfall photographs and videos so we’ll see you in a few days.